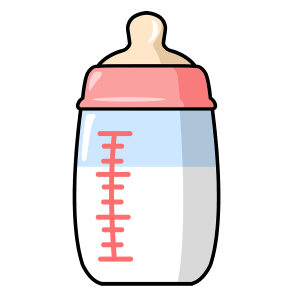 Back before Wyatt was born I posted on my FB page asking for feedback on what Moms felt most guilty/judged for in their first little while as a Mom. I was expecting the usual suspects – co-sleeping, use of soothers, going back to work, etc. But (not completely surprising) the resounding response was “not being able to breastfeed”

I know that pain all too well. When I had O, we tried and tried and tried to breastfeed. I tried nipple shields, lactation consultants, side hold, football hold, laying down, standing up…every thing you can think of, we tried. All I could think of every time it didn’t work was how much of a failure I was because I couldn’t do something that was completely “natural” This feeling of guilt (along with other things) very quickly spiraled into the early stages of Postpartum Depression. Everything felt like a catastrophe, I stopped eating, I was always crying and felt no bond with O.

People would say to me “Isn’t being a Mom the best thing” and as I smiled and nodded, all I could think of was how I wanted to run away.

Eventually, after gentle encouragement from Jon, I decided to pump and bottle feed because then he was still getting the “best” form of nourishment. So for 5 long months, I would pump breast milk every 3 hours for 20 minutes and feed it to O. All because I felt like I was failing a little LESS. I still didn’t feel super connected to O but at least he was getting breast milk, right?

Eventually, I stopped feeling guilty and we switched over to formula feeding (which I really wish I had just done from the beginning). The pressure and stress that I had been feeling started to subside and I actually started to enjoy being a mom. I finally started to feel bonded to O…5 months after he was born.

The point here is this – I was so focused on feeding O with breast milk I missed out on so much with his first few months. I panicked when he wouldn’t settle after a feeding because I had to pump to keep up my supply. I panicked when I wasn’t producing enough milk. I had a whole system set up so I could pump and feed him at the same time so I could actually get some sleep at night.

And for what? So when people asked if I was breastfeeding I could say “No, but I pump and feed him that way” and feel somewhat less guilty. I can tell you, there is a very different reaction between telling someone you breastfeed vs telling them you formula feed. When I would tell people that we weren’t breastfeeding but we were giving him bottled breast milk, you could almost feel their relief.

And listen, I get it. Breast milk is amazing stuff. Breastfeeding, if possible, is great. So far with W I’ve been fortunate enough that it’s working for us. However, at first, I had so much anxiety about it not working, even though I promised myself I wouldn’t go down that path again. Even though I believe with ALL my heart, fed is best.

Let’s look at it this way – you have a woman who just gave birth. Her hormones are all over the place, her vagina (or incision, if it was a c-section) is screaming in pain. She’s bleeding. She’s tired. Her nipples are bleeding and chapped because she can’t get her baby to latch. She’s sitting on her couch sobbing and her baby is wailing because he’s hungry. She feels like a failure because all she hears is nurses, doctors, family, friends telling her “BREAST IS BEST” She looks at her baby with frustration and anger because why isn’t it working? What’s wrong with her and what’s wrong with the baby that they can’t make this work?

So, tell me again…how is this the best option?

Breast milk is amazing and I am NOT discounting that. It is the “optimal” food for your baby in their first year of life. It has antibodies that can help the babies immune system.

And to that point, I also get that formula isn’t “natural.” However, you know what else isn’t natural? A mom not bonding with their baby because they can’t breastfeed. Or, in more extreme cases, a child loosing their mother into the depths of postpartum depression or even worse, to suicide (something that happened to a mother in BC.) all because they couldn’t breastfeed. They felt THAT much pressure to breastfeed. I know, because I was there.

Here’s the thing. They really push breastfeeding at the hospital because they want women to feel supported in their breastfeeding journey. And a lot of the time, breastfeeding doesn’t come naturally to the baby and it DOES take some trial and error. So, if the mother wants that support, it’s great that it’s there.

I guess what I also don’t understand, is why it matters so much to other people how you feed your baby. Why are people so concerned about whether or not you breastfeed or formula feed? What does it matter to them?

If a women chooses not to breastfeed, that is HER choice. Not her partner’s choice, not her parents choice, not her aunt’s choice, not the random stranger at the mall…it is her choice. And if it means she will be a happier, healthier mom because of it, THAT is what is important.

So, to the Momma out there, sitting on your couch crying…it’s going to be ok. If breastfeeding is very important to you but it’s not working, find a support group like La Leche League or get a referral to a lactation consultant. If you’re at the point that you just don’t want to breastfeed, that’s ok too. You’re still an amazing mom.

Now, if you’re feeling like you’re not just experiencing the “baby blues” (learn the difference here) and that it’s something more serious, find a postpartum support group.  Or, find a Mom’s group on Facebook and your community or talk to your doctor about medication.

Whatever you are doing, whatever is working for you and your family, DO THAT. As long as you are feeding your baby…you’re doing an amazing job.

We’re all in this together.

I’m a Momma to two boys under 3. I’ve recently started a journey of becoming a mentor for other moms who want to talk about the stuff they are worried about saying outloud, setting goals for themselves and reconnecting with their awesome selves. View more posts

4 thoughts on “Fed is Best”